This post is authored by LDM lawyer Maria Lighthall.

The sworn deposition testimony is taken, but then comes the Errata Sheet with both form and substantive changes that contradict prior testimony.  Are such changes in testimony admissible at trial?  The Majority rule says yes. 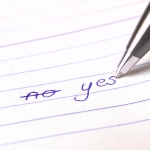 Pursuant to the plain language of Neb. Ct. R. Disc. §6-330(e), changes to deposition testimony in form or substance are permitted so long as the changes are accompanied by the reasons for the change.  Specifically, §6-330(e) provides that “[A]ny changes in form or substance which the witness desires to make shall be entered upon the deposition by the officer with a statement of the reasons given by the witness for making them.” (emphasis added).

Although there appears to be no Nebraska case law directly addressing §6-330(e), Nebraska courts will look to federal case law for guidance because the Nebraska Rules of Discovery are generally and substantially patterned after the corresponding discovery rules in the Federal Rules of Civil Procedure. Gernstein v. Lake, 259 Neb. 479, 480, 610 N.W.2d 714, 716 (2000).  The traditional view adopted by federal courts in interpreting Rule 30(e) is that any changes are permitted, regardless of whether they contradict deposition testimony.  Lugtig v. Buttermaid Bakeries, Division Ward Foods, Inc., 89 F.R.D. 639, 641 (N.D. Ill. 1981), Summerhouse v. HCA Health Servs., 216 F.R.D. 502, 508 (D.Kan. 2003) (permitting changes in form and substance but limiting changes that materially bear upon an essential element or defense).  The rule does not require a judge to examine the sufficiency, reasonableness, or legitimacy of the reasons for the changes. Lugtig, 89 F.R.D. at 641.

One final word of caution: even though you can make substantive changes – the original response can be used for impeachment purposes.