A recent case issued by the Iowa Supreme Court addressed the “fair value” of stock in a closely held farm corporation buyout. In Guge v. Kassel Enterprises, No. 19-2151 (Iowa Sup. Ct June 18, 2021), the Court provided clarity for determining what factors Iowa courts consider in calculating the “fair value” of a corporation in lieu of a dissolution proceeding. In Guge, three siblings owned all of the shares of a family farm corporation. The two sisters brought a lawsuit seeking judicial dissolution of the corporation alleging their brother, the majority shareholder, engaged in oppressive conduct.  The parties were unable to agree on a stock valuation within the permitted time under Iowa statutes.  The corporation, under Iowa Code Section 490.1434, elected to buy the sisters’ shares at fair market value rather than proceed with a judicial dissolution.

However, the Court refused to factor in the deduction of built-in gain tax into the equation.  S corporation’s unlike C corporations, pay no income tax at the entity level. Rather, tax is paid at the individual shareholder level, with taxable gain passed onto the departing shareholder. The Court reasoned that allowing a deduction for built-in gain under the “fair value” method to the corporation would result in a double tax  on the selling shareholders because the selling shareholders pay taxes on the built in gain resulting from appreciation of their stock and would also be penalized by a lower stock valuation.  Further, the Court found that the majority shareholder in Guge, had no intention of selling the corporation’s assets and therefore, any hypothetical tax implications could be avoided by passing his shares to his children upon his death. The Court may have been willing to factor in built-in gain deductions if the corporation’s assets were subject to an imminent sale that was unrelated to the transaction that triggered the shareholder action.

With a closely held Iowa farm corporation, an asset-based method will likely be used to calculate fair value. Under this approach and with the guidance in Guge, Iowa courts will use the valuation of the corporation’s total assets, less the total liabilities and then discount the value by the hypothetical transaction cost to calculate total shareholder equity.  Next, the court will divide the total shareholder equity amount by the number of outstanding shares. The court will then calculate the number of shares that are being purchased to determine the total purchase price.  If there is no imminent sale, and the corporation is taxed as an S corporation, Iowa courts will not allow a deduction for built-in capital gain. 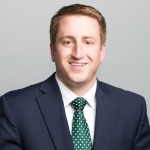