In a recent case of first impression the United States Bankruptcy Court the Northern District of Iowa (In Re: Devries, BK No. 19-00181), Thad J. Collins, Chief Bankruptcy Judge, interpreted recently-enacted Bankruptcy Code section 1232(a) to make capital gains by a farmer an unsecured claim for taxes not accorded any priority, and not subject to setoff under section 553(a).

The court, relying significantly on Legislative History, held that Congress intended the priority-stripping provision contained in section 1232(a) to be interpreted to promote successful reorganizations of family farming operations “by limiting the impact of the substantial capital gains taxes that tend to follow the sale of farmland or equipment.”

According to the court, section 1232(a) was enacted by Congress in response to an “unfortunate” Supreme Court decision (Hall v. United States, 566 U.S. 506 (2012)), which had cast doubt on the priority-stripping provisions of Chapter 12. At least for the court in the Northern District of Iowa, the 2017 intervention of Congress was welcome, providing a significant benefit to family farmers.

This article was authored by Frank Schepers, Partner at Lamson, Dugan & Murray, LLP 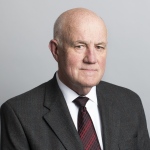