A Tradition of Excellence

Lamson Dugan & Murray was established with simple principles:  hard work, integrity and excellence in our practice. With over 40 attorneys supported by experienced paralegals, a large in-house library and electronic legal research capabilities, we remain committed to quality representation, accessibility and relentless hard work on behalf of our clients. Within the areas of litigation and corporate law, our extensive experience has enabled Lamson Dugan & Murray to offer great expertise in a wide variety of specializations. The Firm’s excellent reputation is well known and far reaching.

A Contemporary Firm with Traditional Values

Lamson Dugan & Murray was established by William Lamson, Michael Dugan and Robert Murray in 1998. Their goal was to create a partnership of talented legal professionals who brought enthusiasm and excellence to the practice of law for the benefit of the Firm’s clients. They accomplished that goal with the creation of a collaborative, open-door work environment where the client has access to the quality services and expertise of Lamson Dugan & Murray’s entire legal staff.

Not every firm is structured the same. Lamson Dugan & Murray is structured as a true partnership, starting with 20 attorneys collectively possessing over 150 years of experience in civil and corporate law. We have since grown to over 40 attorneys with expanding experience in a variety of specialties outlined on the Practice Areas page of this website.

The strength of a law firm depends on the character of the Firm’s attorneys. Founding member Michael J. Dugan epitomized the personality of Lamson Dugan & Murray. 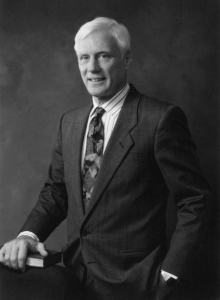 Mike Dugan, a native of Omaha and graduate of the University of Notre Dame and Creighton University School of Law, was the partner in charge of the Firm’s Insurance Regulatory

Practice Group, working closely with Lawrence F. Harr, Frank J. Barrett and Senator E. Benjamin Nelson. As a former Director of the Nebraska Department of Insurance, his practice extended throughout the United States and Europe representing insurance entities of all sizes in various corporate and regulatory matters. Mike was an All-State quarterback for Creighton Prep High School and went on to play football at the University of Notre Dame. “Magic Mike” as he was known to his competitors, was a recent inductee into the Nebraska High School Sports Hall of Fame.

Mike was the father of eight and a mentor to many. He was instrumental in developing the principles that guide Lamson Dugan & Murray today. His daily commitment to creating positive energy in the workplace, along with his devotion to strong client connections and his overall professional spirit, made it a true privilege to have had Mike on the Lamson Dugan & Murray team.

The Firm encourages its lawyers to be active in the community and support philanthropic activities. Lamson Dugan & Murray attorneys have served on boards and committees and otherwise supported several community organizations, including United Way of the Midlands and Joslyn Art Museum. The Firm is committed in providing pro bono legal work for the Volunteer Lawyers Project and supports the mission of the Legal Aid Society, which believes that no one should be denied access to justice because of poverty.